When you need a vehicle that does absolutely everything – towing, carrying lots of people and cargo, going off-road, providing a civilized drive with some style – it’s hard to top a full-size SUV. And for decades, the two that have ruled the segment have been the Chevrolet Tahoe and its longer sibling, the Chevrolet Suburban. For 2021, they have been completely redesigned along with their GMC Yukon and Cadillac Escalade cousins, giving it the opportunity to out-do the Ford models, which were redesigned a couple of years ago.

The result of this overhaul is a pair of full-size SUVs that compare far more favorably to their main competition, the Ford Expedition. Much of this has to do with the Tahoe and Suburban’s new independent rear suspension, which has dramatically expanded passenger and cargo space, while improving driving manners as well. The availability of a magnetic air suspension really turns up the dial in that regard. There’s also an expanded engine lineup: joining the pair of mostly carryover V8 engine options is a torquey and fuel-efficient turbodiesel inline-six. The interior is arguably the Tahoe and Suburban’s strongest area relative the Ford, as it has a more premium design and higher-quality materials than Chevy’s trucks. The Expedition, by contrast, is a mirror image of the previous-generation F-150. In total, the new Chevy Suburban and Tahoe are great choices for the buyer who needs maximum people and cargo capability while also being pleasant to drive.

The Tahoe and Suburban have been completely redesigned for the 2021 model year.

What’s the Tahoe and Suburban interior and in-car technology like?

Unlike past generations, the 2021 Chevy Tahoe and Suburban get an interior that’s completely different than the Silverado pickup truck. That’s a very good thing. The dashboard is fairly low, and cascades downward in a gentle curve. It’s thinner and has nice brightwork and detailing that both makes the cabin feel airier and more premium than that of the Silverado. Controls are generally easy to use, from the responsive and simple standard 10-inch infotainment touchscreen to the large buttons and knobs in the center stack. The push-button transmission is a little odd, but is easy to adjust to.

The Tahoe and Suburban can be loaded up with some pretty nifty technology, too. An 8-inch screen can be added to the instrument panel, and Chevy even offers a 15-inch color head-up display. Rear passengers can be treated to dual 12.6-inch entertainment screens. They can even allow rear passengers to find and select destinations to be put into the SUV’s navigation.

Every row of seats is quite spacious, though the seats themselves aren’t the best. The front row is a bit flat and firm, and each row of seats back adds to that flatness and firmness.

How big is it?

Being full-size SUVs, the Tahoe and Suburban are sizable, and the redesign made them bigger than ever. The Tahoe grew the most with an extra 6.7 inches of overall length and 4.9 inches of wheelbase. The Suburban only gained 1.3 inches of extra length, but the wheelbase expanded by 4.1 inches. And while going to an independent rear suspension (IRS) didn’t add any external size, it did help expand the interior, which is vastly larger than before.

Unsurprisingly, the biggest interior gains come with the more substantially expanded Tahoe. It picks up 3 inches of legroom in the second row, and a massive 10.1 inches in the third row thanks to the IRS and the consequent lower floor. The Suburban gains a little over 2 inches of legroom for each row. Importantly, the size increase is noticeable in practice. Your 5-foot-11-inch author could comfortably sit behind himself in both the second and third rows in both SUVs. The third row in particular is pretty flat, but it’s exponentially more spacious and comfortable than before. Even tall adults can sit comfortably back there now, and although the Ford Expedition’s is still more comfortable and spacious overall, few other vehicles can top the Tahoe (or Suburban) for third-row space.

Cargo space expands significantly, too, compared with the smaller previous models. Behind the third row seats, the Tahoe has 25.5 cubic feet of space, an improvement of 10.2 cubic feet. That’s also roughly a 6-cubic-foot advantage over the Expedition on paper, but in practice, we found the actual difference to be negligible. Still, it’s a genuinely large space for a three-row vehicle. Of course, if you plan to routinely travel with all three rows filled, opting for the Suburban and its added cargo space is a good idea. Its cargo space behind the third row swells to 41.5 cubic feet (an increase of 2.2 cubic-feet from before). We should also note that the switch to an independent rear suspension for 2021 has significantly lowered the floor and therefore liftover height.

What’s the performance and fuel economy?

The 2021 Chevy Tahoe and Suburban have three different engines to pick from. The base engine is a naturally aspirated 5.3-liter V8 making 355 horsepower and 383 pound-feet of torque. It’s coupled to a 10-speed automatic transmission and available with either rear-wheel or four-wheel drive. Regardless of drive wheels, the engine in the Tahoe returns 16 mpg in the city, 20 on the highway and 18 in combined driving. Those numbers also apply to the rear-wheel-drive Suburban, but the four-wheel-drive version drops to 15/19/17.

Available only on the High Country trim is the naturally aspirated 6.2-liter V8. It makes 420 horsepower and 460 pound-feet of torque. Like the 5.3-liter engine, it comes with a 10-speed automatic and either rear-wheel or four-wheel drive. Fuel economy for both the Tahoe and Suburban with this engine is the same, with the two-wheel-drive version getting 15 mpg in the city, 20 on the highway and 17 combined. The four-wheel-drive version gets 14/19/16.

A unique offering for the GM full-size SUVs is the diesel 3.0-liter inline-six. It’s the only engine like it in the class. It makes 277 horsepower and 460 pound-feet of torque and will also get the 10-speed automatic. Chevy hasn’t released all the details on availability and cost for the engine yet, since the engine isn’t quite yet on sale (it should be coming later in the model year). It appears it may only be offered with rear-wheel drive, since that’s the only combination for which fuel economy numbers have been given. It’s substantially more efficient than the gas V8s, with the Tahoe version getting 21 mpg in the city, 28 on the highway and 23 combined. The Suburban gets the same, though highway fuel economy drops to 27 mpg.

There are a wide array of Tahoe and Suburban powertrain and chassis combinations, and we haven’t driven them all, but the versions we’ve driven have been impressive. Four suspension offerings are available: a fixed steel spring and shock system; an air suspension; a steel spring suspension with magnetic dampers; air suspension with magnetic dampers. We haven’t sampled the base system, but we would nevertheless suggest a Tahoe or Suburban with the magnetic dampers. It provides a glassy smooth ride, limited body roll, and its controlled enough to eliminate nearly all the shimmies and shudders that crop up in large, body-on-frame vehicles.

The air suspension on its own lets those body wiggles through more, but is still pleasant. In the default comfort mode, it rides fairly soft with moderate body roll, and the sport mode stiffens things up noticeably, but without becoming uncomfortable. Regardless of suspension, you get the same steering, which is excellent. It’s nicely weighted, and it’s quite precise. And even with the more roly-poly base air suspension, the truck handles well with good turn-in and a stable, composed feel even over bumpy corners.

We’ve also now driven Tahoes and Suburbans with every available engine. The 5.3-liter V8 provides perfectly adequate acceleration, but it’s no match for the Expedition silky smooth and far more powerful turbo V6. The 6.2-liter is a much better contender and does liven things up a bit, though we still wouldn’t call it fast. Ultimately, we think the Duramax diesel is the best choice. It certainly won’t be fast, either, but its benefits are many. Its peak torque matches the 6.2-liter, but occurs at 1,500 rpm rather than 4,100. That makes it well-suited to towing and results in acceleration that feels stronger off the line. Importantly, its fuel economy will also be substantially better than the gas V8s, especially if you plan on doing lots of highway driving.

Towing capacities are between 7,500 and 8,000 pounds depending on body style, engine and drivetrain. The diesel is the best choice, but only slightly. A tow package increases capacity across the board and actually results in the 5.3-liter being slightly better, but again, the difference is small.

What more can I read about the Tahoe and Suburban?

Our most substantial drive of the Suburban, plus our first impressions of the new Duramax diesel option.

We take our first drive in the new Tahoe and find that it drives well and has a quality interior. 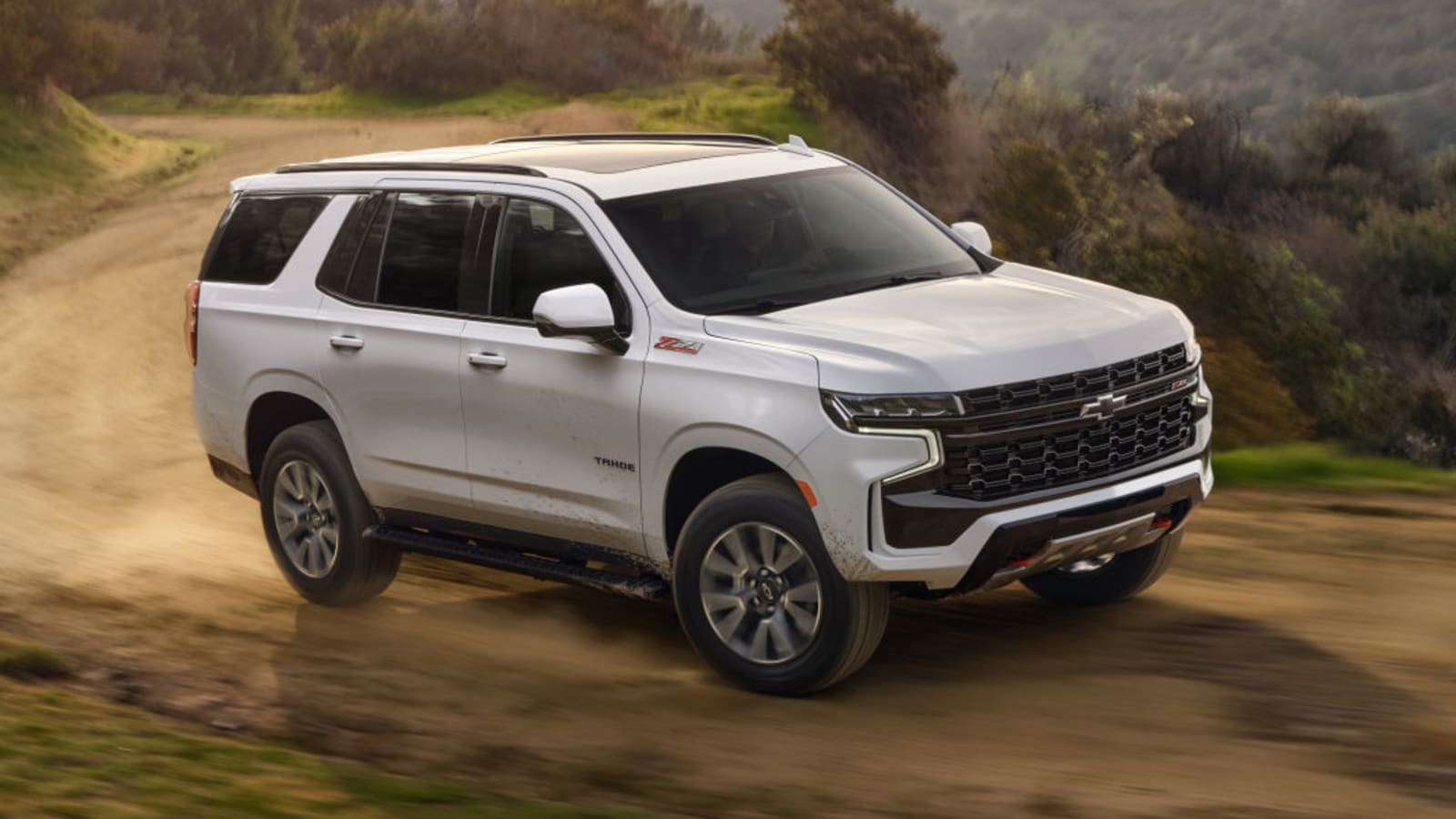 Taking a closer look at the 10.2-inch touchscreen included in every ’21 Tahoe and Suburban. 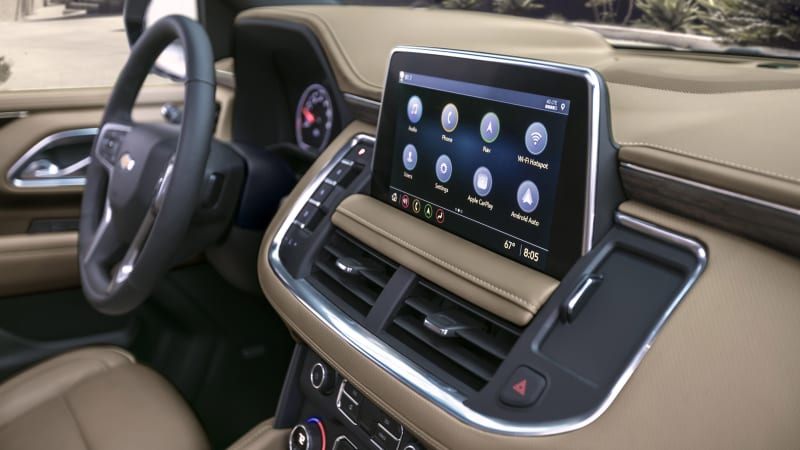 The switch to an independent rear suspension has profoundly increased third-row seat space for 2021. There are several other new features, which we highlight in this post with video. Riswick’s dog also makes an appearance. 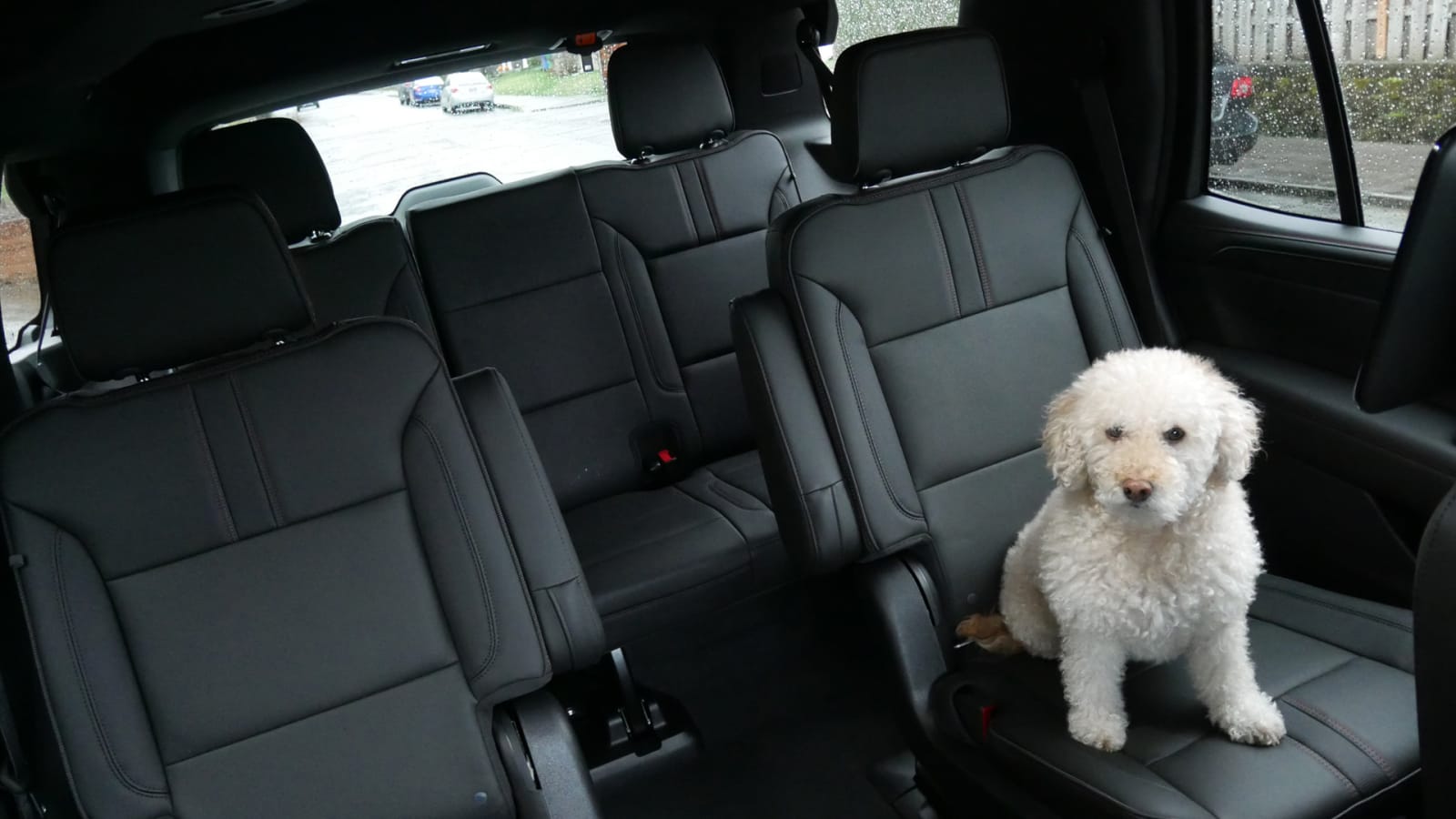 2021 Chevy Tahoe Luggage Test | How much fits behind the third row?

The independent rear suspension makes a huge difference for cargo space, specifically behind the third row. We take a closer look and compare it to the Ford Expedition. 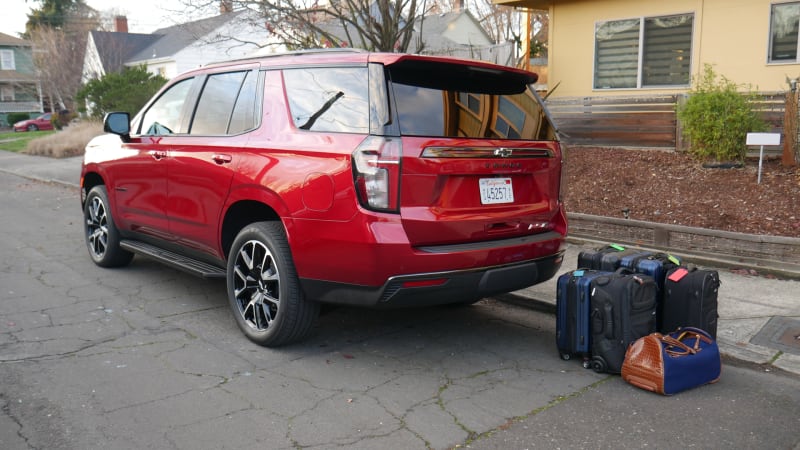 An in-depth look at the Tahoe and Suburban’s new suspension design and its effects. 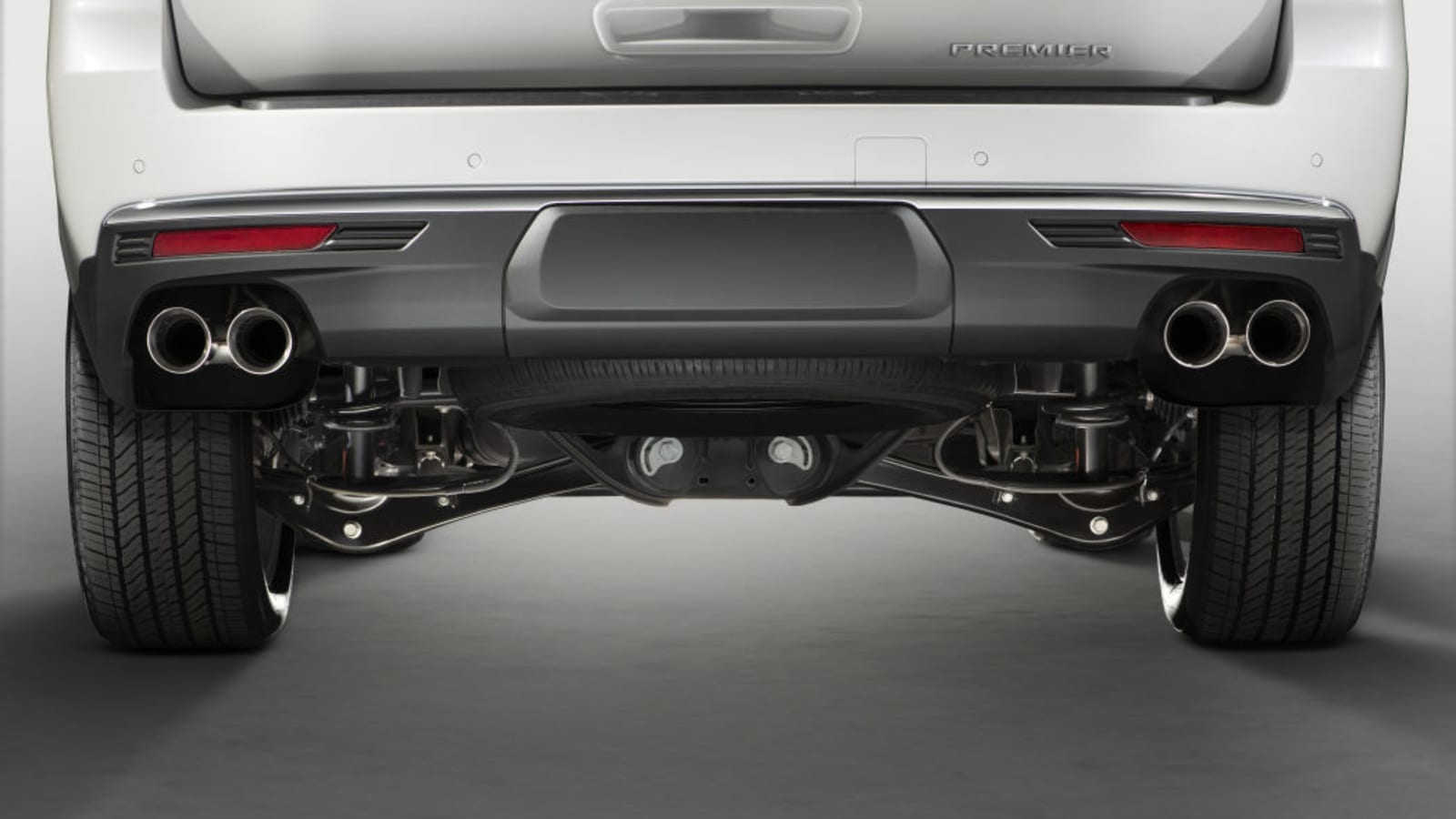 What features are available and how much does the Tahoe and Suburban cost?

The 2021 Chevy Tahoe starts at $50,295 for the base, rear-wheel-drive LS. The Suburban equipped the same way starts at $52,995. This model comes with the 5.3-liter V8, engine and transmission coolers, and a limited-slip differential. On the outside, it gets 18-inch alloy wheels, heated side mirrors, running boards, rear parking sensors, LED headlights and remote start. Inside it has proximity entry and starting, three-zone climate control, eight-way power driver seat and six-way power passenger seat, the 10-inch infotainment screen, 4.2-inch screen in the instrument cluster, a six-speaker sound system, wireless Apple CarPlay and Android Auto, and some basic driver assistance tech (see Safety section).

Noteworthy trim levels are the Z71 and the High Country. The Z71 gets a unique front fascia and bumper that provides a better approach angle and more aggressive appearance. It also gets hill-descent control, 20-inch wheels, all-terrain tires and a skid plate. The Z71 can be further enhanced with the air suspension for even greater ground clearance. It starts at $60,495 for the Tahoe and $63,195 for the Suburban. The High Country is the luxury specification and comes with the 6.2-liter V8, magnetic and air suspension, 22-inch wheels, 360-degree cameras, adaptive cruise control, blind-spot monitoring and lane keep assist, rear camera mirror, leather heated and cooled front seats, heated steering wheel, heated second row seats, power folding rear seats, a large instrument panel screen and head-up display, 10-speaker Bose sound system and wireless phone charging.

Also worth noting are the towing assists available on the Tahoe and Suburban. There are cameras that can provide up to nine views for maneuvering and monitoring a trailer. They come standard with a trailer guidance feature with the standard rear-view camera. There’s also an app on the infotainment that lets you store information about your trailer and go through various checks when hooking up the trailer.

You can find a full breakdown of features, specs and trim level pricing here on Autoblog for the Tahoe and here for the Suburban.

What are its safety equipment and crash ratings?

Neither of the big Chevy SUVs has been tested by IIHS or NHTSA, so there are no crash test ratings available for them.